2nd T20I: Padikkal, Gaikwad among 4 youngsters to debut for India 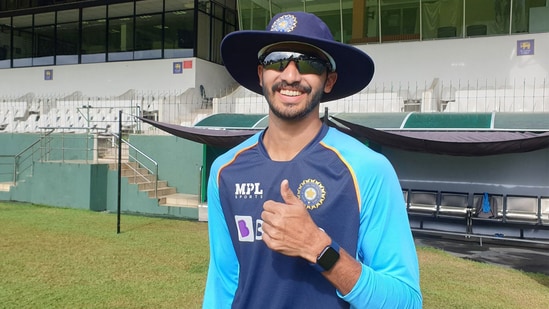 Captain Shikhar Dhawan called India's young lot of cricketers 'street fighters' who are 'ready for any challenges' as the team handed debuts to four youngsters in Devdutt Padikkal, Ruturaj Gaikwad, Nitish Rana and Chetan Sakariya for the second T20I against Sri Lanka in Colombo on Wednesday.

With nine Indian players in isolation, including all-rounder Krunal Pandya – who tested positive for Covid-19 on Tuesday – India were left with no option but field the 11 players they were left with. The BCCI earlier in the day added five net bowlers – Ishan Porel, Arshdeep Singh, Sandeep Warrier, R Sai Kishore and Simarjeet Singh – to the original T20I squad, but coach Rahul Dravid and skipper Dhawan went with the original pool of players.

From the four debutants, Sakariya and Rana had made their India debuts earlier as they were picked in the team for the third ODI last week. Rana had scored 7 with the bat, while left-arm pacer Sakariya had impressed with 2/34 from eight overs.

"We would have batted first, so I'm happy with it. There are four debutants. Lots of changes due to obvious reasons. We're all looking forward to this. We're street-fighters and ready to face the challenges," Dhawan said at the toss.

"Our main players aren't here, but that gives the chance to the younger players. They have created great energy for the last 45 days, and I'm glad they have got their chances. These things can happen in the current scenario, that's why we brought a large squad."

Sri Lanka won the toss and opted to field, with captain Dasun Shanaka informing of the two changes they made from the previous match. Charith Asalanka and Ashen Bandara miss out.