Tokyo Olympics 2020: In victory over Iran, Team USA sends a message on and off the basketball court 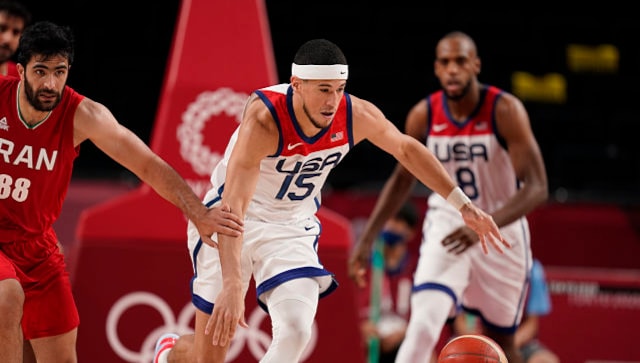 Gregg Popovich is not the United States Secretary of State. He wants to make that much clear at the outset.

His clarification comes after his side, Team USA, put on a diplomatic masterclass off the court while giving a basketball demonstration on the court against Iran.

In the perpetually simmering cauldron of nationalistic politics that are the Olympic Games, it is rare that two teams representing countries with as much political acrimony between them as USA and Iran end on opposite sides of a lopsided scoreline such as the 120-66 demolition witnessed on Wednesday and still walk off the court together cordially.

Walking off together was just one of the things. It was an evening which started with the US and American players applauding each other’s national anthems and culminated with a bunch of Iranian players getting clicked and having one-on-one conversations about the game after the clash with their “heroes”. After the final whistle, Saeid Davarpanah accosted Team USA’s Damian Lillard...for a picture. Mohammad Jamshidijafarabadi chased down and cornered Phoenix Suns’ Devin Booker for one of their own photos.

On any other ordinary day, the scoreline of 120-66 would have been the biggest talking point for Team USA. After all, this American men’s basketball team that looks more like a facsimile of the real deal than another assembling of the Dream Team for an Olympics campaign. But on Wednesday, at the Saitama Super Arena, gestures from both sides were the more meaningful takeaway, particularly since the governments of the two teams refuse to see eye to eye with each other for over four decades.

“I’m not the Secretary of State or anything like that, so I’m not sure what you’re looking for,” said Popovich, when asked about the significance of an American team and an Iranian team sharing a basketball court. And sharing it amiably.

“In general, people in different countries get along a whole lot better with each other than their governments do. If people in all of these countries were running the show, things would be a whole lot better. When you involve politicians, it becomes much more complicated with self-interests, ideologies and personal agendas.

“The Olympics here are a venue and a time where sport transcends all that petty crap that you get from governments,” he said. “There’s no surprise that the coaches would enjoy meeting each other, talking to each other, and players showed sportsmanship. We just wished that that was real life, which we all have to live through.” While the players had their own moments, Popovich and his Iranian counterpart, Mehran Shahintab, too had lot of mutual respect for each other.

“Pop is one of those great coaches. He’s respectful. He praised my players. I appreciate that. We learned a lot about basketball. We respect people,” Shahintab told journalists in the post-match press conference. “It’s a break from politics.”

While Team USA and Iran won plaudits for their off the court gestures, on court, the Americans bounced back from their opening game defeat to France with a victory that was a reiteration to themselves—and others—that they’re a formidable basketball team.

A superstar-laden Dream Team like the one in 1992 Barcelona this Team USA outfit is not. Many American marquee men, from LeBron James to Steph Curry to Anthony Davis to Kawhi Leonard, are missing the Olympics for myriad reasons. But any team with names like Kevin Durant, Jayson Tatum, Devin Booker, Khris Middleton, Draymond Green and Damian Lillard should still be good enough.

Their recent string of losses—in exhibition games to Nigeria and Australia, besides the opening day loss to France—have raised concerns about the ability of this team to win a medal at the Olympics that’s always perceived as a foregone conclusion.

After the game, an Iranian journalist asked Lillard if it was indeed necessary for USA to apply pressure from the start to end of the game that too in such an easy game.

“We’ve been trying to put together a 40-minute game. So far, we’ve have two quarters in a game then a bad quarter and a good quarter to finish. Or we will start slow and get better as the game goes on. Tonight, we wanted to put a 40-point game together,” said Lillard, who revealed that playing for Team USA had been a dream for him since he broke into the NBA.

One of the reasons players and coaches gave for the team’s funk is that many of the players arrived late for camp or to Tokyo because they were involved in the NBA Playoffs until recently. Another reason is that many of the players are caught in two minds between sharing the ball or going for shots themselves, particularly with clinical shooters such as Booker, Lillard, Durant and Tatum in the ranks.

“We don’t want to step on each other’s toes,” articulated Lillard.

In this mental fog, Lillard made an uncharacteristic mistake in Game 1.

Meanwhile, Popovich, underlining the team’s new ethos, said: “Each of these guys scores 20, 25 or 30 points for their team in the NBA. Their teams depend on that. But we cannot play like that. We don’t need heroes. Everybody is, in a sense, a role player now.”