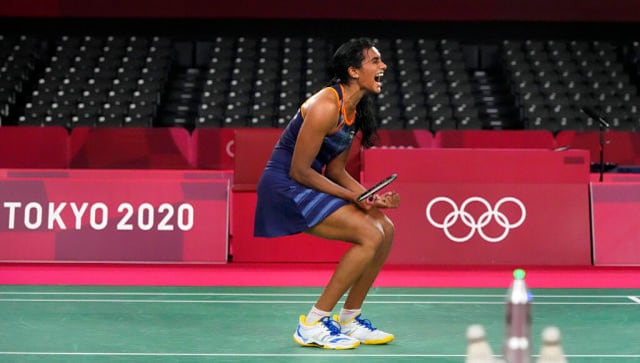 Tokyo: Reigning world champion P V Sindhu kept alive India's hopes of a first-ever Olympic gold in badminton by reaching the semifinals of the women's singles with a straight-game win over world No.5 Japanese Akane Yamaguchi here on Friday.

The 26-year-old Indian, who won a silver in the 2016 Rio Olympics, defended brilliantly and rode on her attacking all-round game to outclass the fourth seeded Yamaguchi 21-13 22-20 in a 56-minute quarterfinal clash at the Musashino Forest Plaza here.

She will next face the winner of the other quarterfinal between Thailand's Ratchanok Inthanon and Chinese Taipei's Tai Tzu Ying.

The sixth seeded Indian came into the match with a 11-7 head-to-head count against the Japanese, whom she had last beaten at the All England Championship in March this year.

Yamaguchi tried to play an aggressive game but Sindhu held her ground and used her good anticipation and reach to stay ahead. The Indian brought out her attacking smashes and half smashes whenever there was a chance to put pressure on her rival.

The opening game saw Sindhu quickly erase a 2-4 deficit to level the scores at 6-6. Yamaguchi committed three back-to-back unforced errors to allow the Indian to move ahead as Sindhu entered the interval at 11-7 with a cross court smash.

Sindhu used her fore court well and took charge of the net. The duo played some good rallies at a good pace but Yamaguchi couldn't find an answer in the exchanges. The Japanese was also too erratic.

Sindhu eventually produced a winner near the net and grabbed the first game when Yamaguchi sent long a return to serve.

Sindhu dictated the pace and seemed in total control, starting the second game with two superb smashes for a 2-0 early lead.

She kept her unforced errors to the bare minimum even as Yamaguchi committed a service error and playing against the drift, struggled to keep the shuttle in.

A superb net dribble and a cross court smash helped Sindhu to again take a five-point advantage at the break.

However, Yamaguchi, lagging 8-13, grabbed eight of the next nine points to open up a slender one-point lead at 16-15 for the first time in the match.

The only time Yamaguchi, who is known for her retrieving skills, could drag Sindhu into an energy-sapping rally was at 15-13 when the duo had an extraordinary 54-stroke exchange. It ended with

Yamaguchi sending the shuttle at the backhand of Sindhu, who was gasping for breath.

With Yamaguchi defending well, Sindhu was forced to go close to the lines. She made errors in the process as the Japanese led 18-16.

A superb net shot saw Yamaguchi grab two game points, fuelling hope of a turnaround but Sindhu responded with authority. She unleashed a straight-down-the-line smash and then set up another point with a smash and a great follow-up to make it 20-20.

Another precise half smash down the line gave her a match point and she screamed her heart out in joy after Yamaguchi found the net next.

On Thursday, Sindhu had notched up a straight-game triumph over Denmark's Mia Blichfeldt, seeded 13th, in the pre-quarterfinals.

She is the lone Indian in fray in badminton after men's singles player B Sai Praneeth and the men's doubles pair of Chirag Shetty and Satwiksairaj Rankireddy failed to qualify for the knockout stage.